Back to the dollhouse - Finally!

I started this dollhouse about 7 or 8 years ago.  Between getting overwhelmed with the complicated roof lines and 3 separate floors, and two moves, the house has had little attention.  The house is a 1:12 scale (1 inch = 1 foot) replica of the house my great aunt and uncle lived in until they sold it around 1973.  The house is still in existance at the corner of 37th and Burleigh, in Milwaukee, WI.  I was able to take photos there from the outside before I began the construction process, supplementing photos I have from visits there.  Since this is a replica of a real house, it does not have the typical open back that most doll houses in the US have.  This makes it a challenge to make the interior accessible for decorating and viewing.  Initially I planned to have each floor lift off in layers, but they are very heavy and tend to twist a bit when lifted up.  The back room addition is at a different level, and I couldn't figure out how to make it easily separate from the kitchen/basement wall.  Ceiling fixtures were also a problem if each floor lifted off.  So here are the pictures of my first attempt.  (Pictures of my solution to these problems later.)  Actually, I guess the first pictures should be of the original house. 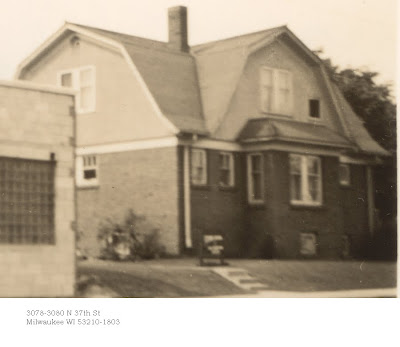 Below, I'm the one in the red shorts.  The others are my mother, my great aunt, my grandmother, and my little sister.  This must have been taken around 1968. 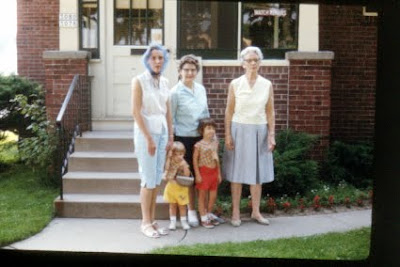 Below are my great aunt and uncle during construction of the new back room. 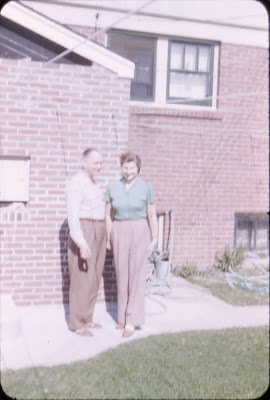 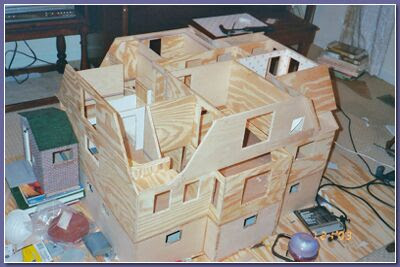 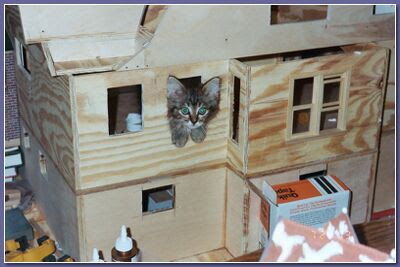 (With the first inhabitant, a furry little waif found under a dumpster at the mall. His name is Bing.) 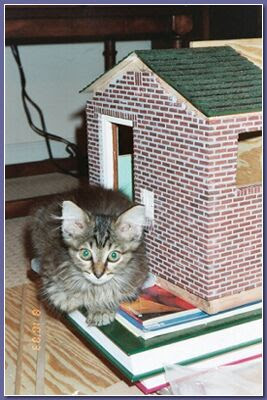 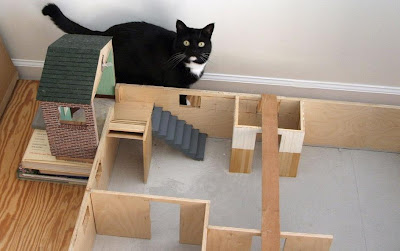 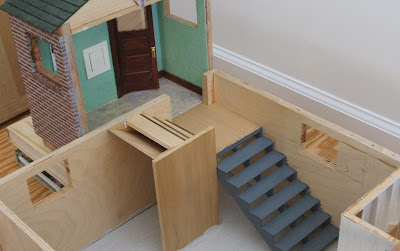 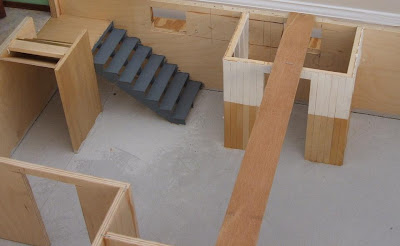 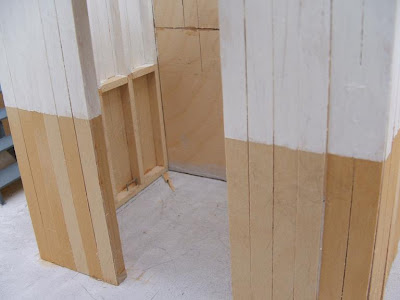 This little room (above) will be the bathroom that was added in the basement. My mother remembers painting the walls herself when she was there visiting. 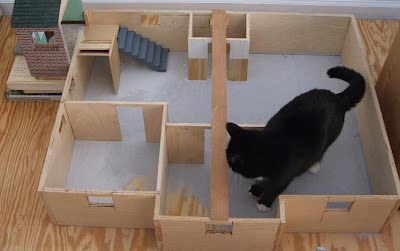 The little black cat in the pictures above is Schatzi. 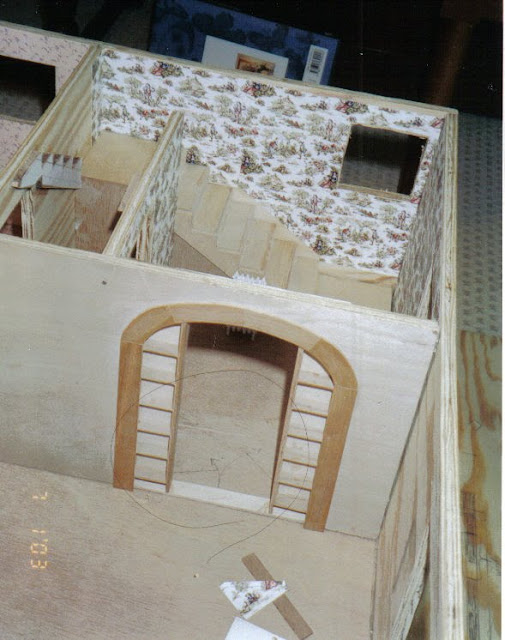 My aunt designed this door herself. The shelves on each side will hold her collection of Dresden dancers and Hummels. The opening will have double French doors. 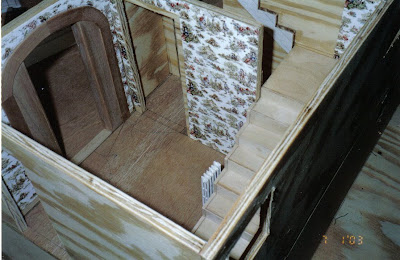 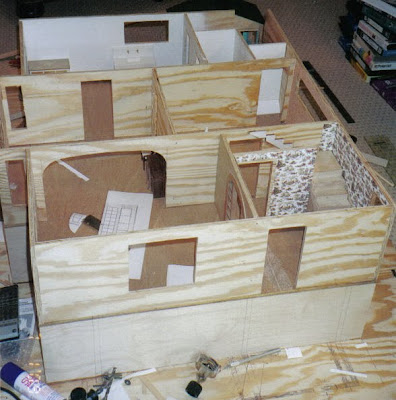 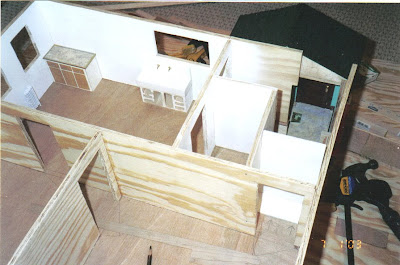 So - here's the beginning of the new version just started this week. I plan to stick build it (with studs and wall board, like a real house) which will make it much lighter weight. I'm going to make vertical sections instead of horizontal sections. There will be 3 main sections - front, middle, and back. I'll use the little back mudroom as it is, and there will also be a closed in front porch that will be a separate piece. I'll be re-using most of the interior parts such as the stairs, door, and basement bathroom, so I'm not really starting from scratch. Here's the new back wall in progress. 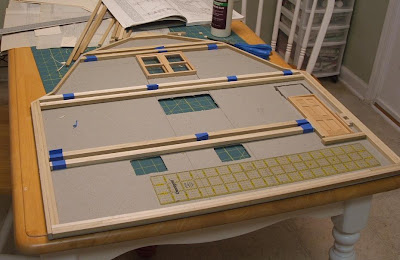 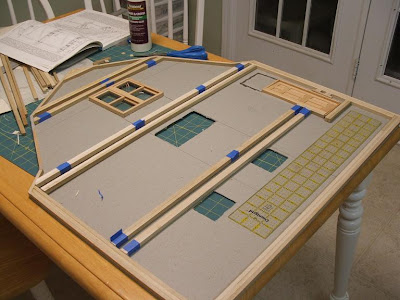 My next task is to cut the verticle studs and drill holes in them for the electrical wire, and then glue them all in place. The exterior sheathing is something I found at the art store called "museum board." It's very sturdy and archival quality, so it won't disintegrate over time. (I hope!) It's about 1/8" thick and can be cut with several passes of a utility knife. I had originally thought I would use 1/8" micro plywood, but that would have been very expensive and harder to cut. The interior wall board will be made of taskboard. I think I got the 1/32" thickness, but I don't remember for sure.
Posted by Melissa Boling at 1/31/2010 05:36:00 PM 0 comments


The first big snow in Nashville, TN in 6 years!  We got about 7" here with 1/4" of ice on the top.  Rosie skated all the way to the bottom of the big drop-off at the back of my yard this morning without even breaking through the crust.  She was one surprised dog! 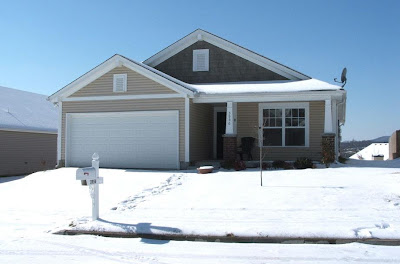 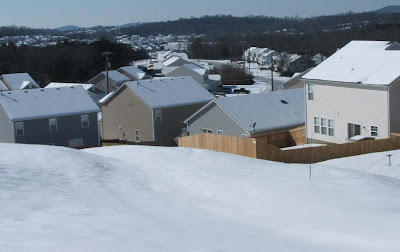 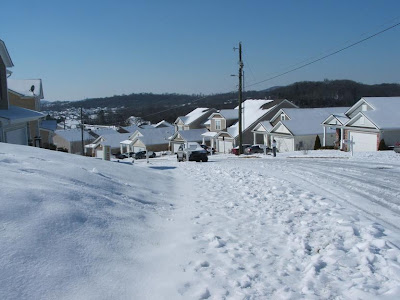 And it was good

Recently I re-read an old book by Madeleine L'Engle.  It's titled And It Was Good: Reflections on Beginnings.  The book is a series of reflections on the book of Genesis, and it was the perfect way to start the new year.  The season of Epiphany in the church calendar begins on Jan. 6, traditionally the day the wise men brought gifts to the baby Jesus.  The season of epiphany lasts for six Sundays, ending with the celebration of the Transfiguration of our Lord and followed by the season of Lent.

The word "epiphany" could be translated into common language as "a light-bulb moment" or an "ah-ha!" moment.  During the season of Epiphany, the church's emphasis is on revelatory moments; times when the people see things as they have not seen them before.  One of the reasons I so like Madeleine L'Engles' writing is that she always challenges me to see or think of things in ways that are different from ways I've seen them before.  My new understandings are not just different, but fuller and richer, and my new understandings invariably stimulate my mind and heart to ask more questions and to think more deeply.