It's hard to believe that so much time has slipped by since the last time I blogged. It's been a sad year - my mother died suddenly on Feb. 16, and my dad's health has been up and down. We have managed a few happy times in between the sad ones. As he puts it, we've been "motoring about the countryside" in his convertible, and we've been able to spend some happy times with his brother and family. I also adopted a new baby named Albert - what a terror he can be, but so sweet too!  He teases the other cats mercilessly and has been known to wrap himself around the dog's hind leg.  Rosie doesn't even try to shake him off.   I was able to attend the Three Blind Mice Miniature Show here in Nashville and came home with several treasures. It was a well-attended show, so I'm hopeful it will return to Nashville next year. A few pictures.... 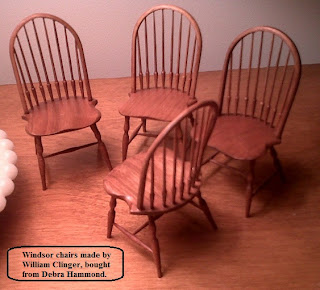