Starting on the Picture Frame

The frame I decided to make is a reproduction of a frame made by John Hall, one of the craftsmen who built much of the Greene & Greene Furniture.  You can read about the history of the frame here.  You can also download the plans if you want to make your own.

Making the frame in miniature is a challenge and will need some adjustment.  What I'm writing and showing you here is my work in progress, and so far I'm winging it!  There may be adjustments made later when I find out that what I'm doing right now doesn't work.  ;-)

The first decision to make was what type of wood to use.  I believe the original frame was walnut, but most of the Greene & Greene items were made of mahogany.  I decided to use Danta wood because it is a good miniature version of mahogany with its close grain and color.

First I printed out the template from the plans and reduced it until it was the right size for the petitpoint.  That took several tries.  Here I'm cutting out the frame from the template and testing it to be sure it fits the stitched piece.  I'll probably have to add in a few stitches where the sides of the frame curve. 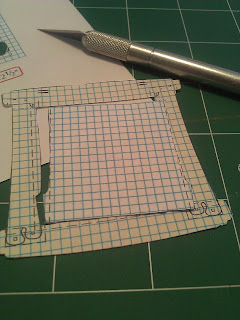 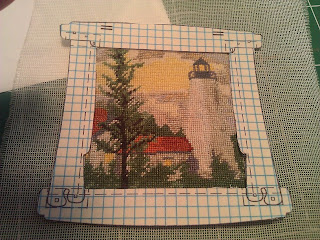 Next, I started cutting out the pattern pieces.  I discovered I had more control with scissors than I had with the knife blade. 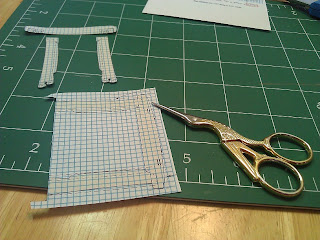 Afte cutting out the top and bottom pieces, I folded them in half and trimmed just to be sure that the right and left sides of the frame would be the same.  The two side pieces could be cut out with one pattern piece by layering the wood right sides together under the pattern and cutting them together.  I didn't, because I was afraid my saw wouldn't remain vertical which would make the top or bottom piece a different size from the other one anyway.  In the article about the frame (linked above), the author noted that none of the pieces of the original frame were exactly alike, especially the puzzle piece shapes at the bottom of the sides.  (Whew, that lessens the pressure!) 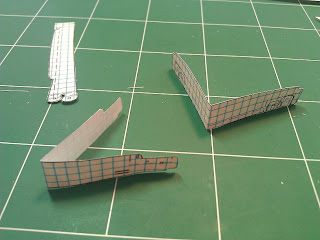 '
The next step is laying out the pattern pieces on the wood.  It's important to have pleasing wood grain on each piece.  Grain on the top and bottom pieces should be horizontal, and grain on the side pieces should be vertical.  Grain should always follow the length of the piece.  Here, I've laid the hole in the template that was left over after cutting out the pattern piece on top of the wood and moved it around looking for a spot with a pleasing grain pattern for that particular pattern piece. 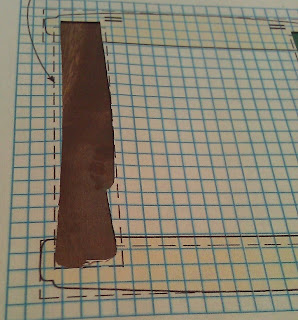 Here, I've placed the pattern on the wood and Scotch taped it down.  Normally I would use double sided tape, but I didn't have any, so I made do.  It worked, but not as well.  It's harder to see the line to cut on, and once the piece is cut out, the pattern falls away instead of staying stuck to the wood until the edges are filed and sanded smooth.  It's important to cut just outside the lines to leave room for final shaping.  You don't want to accidentally cut the piece too small.
This is my set-up for using my jeweler's saw.  The tall stand underneath is courtesy of Bill Robertson from a class he taught.  Clamped on top of it is a wooden jig rigged with metal and plastic tubing and a small air pump that blows air on your piece as you saw, blowing away the sawdust that would otherwise obstruct your view as you work.  I found it several years ago at Stewart McDonald.  The one they have now isn't exactly the same as what they sold then - from the reviews, it's just a fish tank air pump attached to a plastic hose.  Here's the jig it attaches to. 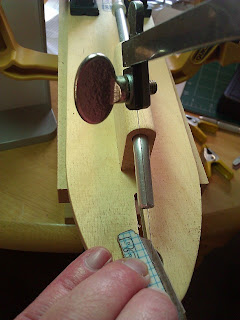 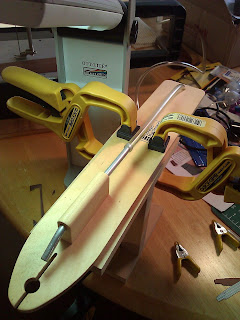 Here are the pieces of the frame that I've already done some filing and shaping on.  Still have to do the top piece. 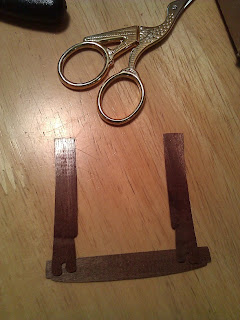