I just got some new minis in the mail from Grandma Holly's House.  What lightening fast service she provides!!!  She had only 2 of these chairs, but she's ordered 2 more for me.  They are made by Reac and are absolutely perfectly scaled for 1:12.  Since there's no table to go with the chairs, I'll have to figure out how to make one. 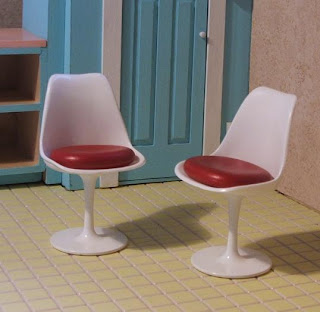 This is a 1:12 scale replica of the Dick Van Dyke Show set which I started building about 10 years ago.  Since then, I've moved twice, so not much has been done.  I was also given some color pictures of the kitchen and living room since this decorating was done, so I'll be re-decorating in more authentic colors.  I've also become a little better in the woodworking dept since I built this, so most of this will be re-done.  This will give you an idea of what I'm working for though.... 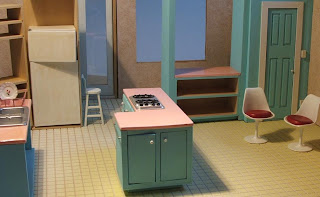 The actual colors in the kitchen were grey, aqua, and pink, with a green rug on the floor. I have some full size wallpaper from the 1960s that I reduced to miniature. It actually has all those colors in it, and I'm going to use it on the wall to the right of the table and chairs. 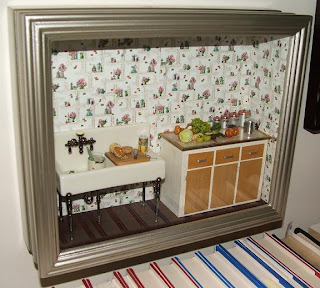 Above is a temporary display in which I used the kitchen wallpaper - just so you can see what it will look like.  The cannisters and percolater will eventually go in the Dick Van Dyke house.  The counter will go in the other dollhouse shown in earlier posts.
Posted by Melissa Boling at 2/22/2010 04:18:00 PM